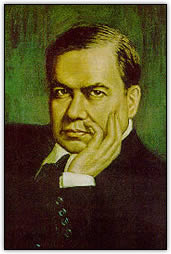 Rubén Darío, also known as ‘The Father of Modernism’, was born in the little town of Metapa on January 18th, 1867. His real name was Felix Rubén García Sarmiento. The name ‘Darío’ was adopted from a great grandfather who was well known as Darío, and his sons and daughters as ‘the Daríos’. This name became so famous that Rubén Darío’s great grandmother signed her name as ‘Rita Darío’. His father, Manuel García, was a merchant who also adopted the name and called himself Manuel Darío when doing business.

Since he was a child he proved to be very intelligent. His favorite books were considered complicated for a child’s mind. The books he read when he was just a child include ‘Don Qujote de La Mancha’ and the Bible. He also wrote some verses for regional celebrations. His creations became known when he was just 12 years old. At the age of 13, he made his first verse publication in a newspaper of the city of Rivas named ‘Termómetro’. Since then, he was known in his nation, Nicaragua, and in the other four Republics of Central America as the ‘child poet’.

He made his first trip to the capital, Managua, when he was becoming a teenager. Here, the Congress gave the ‘Child Poet’ a scholarship to study in Europe. Nevertheless, when he was at a party in the Presidential Palace, he recited a poem that astonished President Pedro Joaquín Chamorro who said: ‘If you write like this, against your parents’ religion and against your country, just being a child, imagine what it would be if you where to go to Europe to learn worse things”; therefore, instead of a scholarship to Europe, the President offered him one to the city of Granada, which he rejected for the historical rivalry between this city and León (where he was growing up). In Managua, he also worked in the National Library, which was an open door to Castilian literature.

At the age of 14, he made his first trip to the neighboring country of El Salvador, where he became a teacher; but he remained here just for a short period of time. Back again in his country, he worked at the Bureau of President Zavala. He had an amorous disillusion, and as he was very romantic, he decided to leave the country once again. This time he traveled to Valparaiso, Chile. A local newspaper of Valparaiso, ‘El Mercurio’, published his writings called ‘The eruption of the Momotombo’. In this same city he published, in 1888, one of his best known and one of the most significant pieces of poetry: the book ‘Azul’ (Blue).

He then traveled to Santiago where he participated in the edition of ‘La Epoca’. In this city, he also joined the intellectual youth of Santiago and got to know Pedro Balmaceda who made the publication of his book ‘Abrojos’ possible.

Thanks to his friends José Victoriano and General Mitre, Rubén Darío got to be correspondent of the Argentinean newspaper ‘La Nación’, which was a long-term dream of him. After writing a report about a Brazilian cruise arriving at Valparaiso, he went back to Nicaragua.

On June 22, 1890 he married Rafaela Contreras in El Salvador. That same year, General Mendez, current president of El Salvador, died. Darío then left to Guatemala after narrating the event under the name ‘Dark History’ (Historia Negra), which was published by the Argentinean newspaper ‘La Nación’. In Guatemala, he became the owner and director of a newspaper ‘El Correo de la Tarde’. Darío then departed to Costa Rica after the journal had to cease operations. In Costa Rica he worked together with various journals. In this country his first child was born: Rubén Darío Contreras.

In 1892 he traveled by himself to Guatemala where he received a telegram informing him that the Nicaraguan government had included him in the delegation that was to travel to Spain for the celebrations of the discovery of America. He then traveled to Panama to join this delegation. On their way to Spain they stopped at Cuba, and on the way back they make a stop at Colombia, which allowed the poet to see a lot of different countries in the world.

The following year his wife died and he drowned his sorrows in alcohol. This same year, 1893, Darío married his second wife, Rosario Murillo (it is said that she deceived him to marry her with help of her brother).

Thanks to the influence of the Colombian ex-president Rafael Nuñez, the incumbent president Caro named him Consul in Buenos Aires. Under this title he traveled to the New York (where he met José Martí) and to France (where he was disappointed by the city he always dreamed of, Paris). He also was disillusioned by authors he admired before: Verlaine and Moreas.

Back in Buenos Aires he was told that his consul title was suspended. He had to adjust his style of living to what he was making with the newspaper ‘La Nación’ and then to the pay check he was receiving from another journal: ‘La Tribuna’. He then worked for the newspaper ‘El Tiempo’. The owner of this journal paid the publication of Darío’s book ‘Profane Prose’. This elegant and sensual piece was the most important example of Modernism due to the French influence and presence of innovative literary tools such as neologism, Anglicism, and archaism.

When he was working as correspondent for ‘La Nación’, he traveled to Spain where he met Francisca Sanchez who would become his inspiration from then on. As correspondent of ‘La Nación’ he traveled throughout almost whole Europe, which gave him the opportunity to meet other important literary figures. In 1905 he wrote Songs of Life and Hope, setting a new tone for literature expression. It was not until 1907 that he returned to his country Nicaragua (the main reason for his trip was to get divorced from Rosario Murillo). He was well-received in his country and named ‘Minister Resident in Spain’. He did, however, not get the divorce, and went back to Europe in 1915. In this same year, he was invited by the president of Guatemala to visit this country; so he stayed a couple of months there before heading back to Nicaragua.

Tragically, after undergoing an operation, he died in the city of León in February 1916. He was buried in the Cathedral of the León, the city he always loved.

Rubén Darío was first admired by Nicaragua. Being just a child, he was interested in complex readings and without the need to travel he wrote as if he had visited the whole world. His themes were always inspired by his early feelings. Then he reached maturity as a writer while he traveled, getting to know what he always dreamed of, and being disillusioned by what he wanted to become. His intense writings and his innovative style made the world notice him. His many voyages, his erotic instinct, his impulsive loves, his freedom of thought, the tragedy of the death of his first wife, and his refuge in alcohol along with his innate intellect, made him the ‘Prince of Castilian Letters’.

Rubén Darío is commemorated throughout Nicaragua. Many streets, schools, and buildings are named after the poet, and there are several Rubén Darío Museums in the country. In the city of Darío (Ciudad Darío) in Matagalpa there is a museum in the natal house of the poet, and in León there is another museum in the house where he lived during his youth. 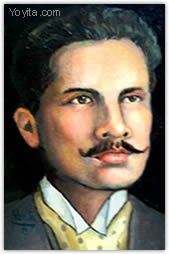 Special thanks to Atelier Yoyita for providing the image of the young Rubén Darío.