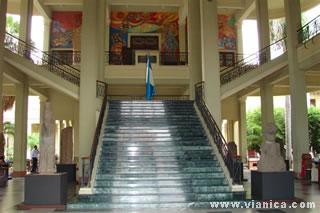 At the end of the 19th century one of the largest and most important centers for artistic and cultural expositions in Nicaragua was created: the National Museum. The collection of the National Museum is nowadays housed in a monumental building and it offers a great variety of exhibitions, ranging from prehistorical bones and pre-Columbian ceramics (4,000 years old) to modern paintings and recent sculptures.

The building that houses the National Museum is called the National Palace of Culture (Palacio National de la Cultura), located in the historical center of Managua. The museum, fully named ‘National Museum Dioclesiano Chávez’, offers nine rooms with permanent and temporal expositions. A small summary of the institution and its different expositions follows in this Special.

Pre-Columbian statues found at Ometepe Island decorate the lobby and consequently turn it into an informal entrance of the museum. The historical battle of San Jacinto is also symbolically depicted in a mural painting. In fact, during the whole tour visitors can enjoy many murals painted by renowned international artists including the Canadian Arnold Belkin, the Mexican Felipe Castellón, and the Italians Maurizio Gobernatori and Giancarlo Splendiani.

The salons of the museum are situated on the first floor of the palace, and a description of each room follows below:

This first room provides visitors an overview of the historical and current geological situation of Nicaragua, the country of ‘fire and water’. Interesting maps about the presence of minerals in different areas Nicaragua are shown, as well as information about the geological formation and the country’s climate.

The small paleontology room has an exhibit of interesting bones of huge prehistorical mammals, found at different sites in Nicaragua. Although few paleontology investigations have taken place in this country, the small collection of occasional findings makes it an interesting room.

This room attracts a lot of interest as it holds a large variety of pre-Columbian ceramics elaborated by different cultures and found at different sites in the Pacific and northern area of the country.

The exposition is grouped by date (the age of the pieces is scientifically analyzed). The pieces date back to between 2000 A.C. and the beginning of the 16th century when the Spanish conquerors arrived in Nicaragua. The samples show the evolution of the techniques to shape and finish the pieces.

The varied collection includes statuettes, containers, utensils, and funeral urns, as well as necklaces and rings of different materials and stone instruments to paint bodies.

This room presents a small but varied exposition of traditional, contemporary art created in different regions of Nicaragua, using different techniques and materials.

The pieces, elaborated by Nicaraguan artisans, are made of clay, marmolina, rope, seed, wood, and ceramics, among other materials.

The fifth room consists of an open area for painters from the Latin American region. Generally, a collection of paintings of a certain artist are shown for a period of one to three months, although works of different painters are also on display every now and then.

The spacious area has a capacity to shown up to 40 paintings. The room is available for renowned artists but also for young, energetic painters.

Metates are stone instruments used by different indigenous tribes to process corn. A whole room is dedicated to these artifacts and to the cultural importance that corn had for the indigenous tribes that lived on Nicaraguan soil.

The exposition includes panels that demonstrate the usage of these metates (or ‘indigenous grinding stones’), and of course there are many different metates on display, found throughout the country. Visitors can observe the different designs and animal figures that were carved in these objects. The metates are generally created from volcanic rock. Studies have indicated that the objects on display were created between the years 800 and 1200.

Room for Friends and Supporters of Art and Culture

This space is dedicated to temporary expositions of an open theme, generally supported by institutions, embassies, museums, or individuals who lend their artistic collection for exhibitions that last for one to three months.

On other occasions, the museum investigates a certain theme and dedicates itself to borrow pieces to complete a temporary exhibition in this room.

Currently there is an exposition of sacred art (or religious images), provided by the San Francisco Convent Museum in Granada. The exhibition includes statuettes and old paintings, some of which where brought to the country during colonial times.

The Güegüense or Macho Ratón is a character from the theatrical comedy play with the same name written in Spanish and Náhuatl and interpreted and performed during colonial times. This play was recognized as Patrimony of Humanity by the UNESCO in 2005, and the museum has two ample exhibition rooms about this subject.

The first exhibition consists of paintings that were created with a pen by the Nicaraguan author Carlos Montenegro. Montenegro graphically displays the Güegüense according to his interpretation. Contemporary publications of this old play are also displayed, as well as many old publications that date back to the 19th century. The melodies are also present. The exposition is completed with the traditional clothing of the El Güegüense character and the instruments used during the performance.

The second exhibition demonstrates the official UNESCO declaration that qualified the piece as “Materpiece of the oral and intangible heritage of humanity”. This second room includes photos, collages, and a video of the festivities during which the traditional play of El Güegüense was performed.

The ninth and last room is named after the great Nicaraguan painter Rodrigo Peñalba, and it is dedicated to contemporary national and regional art, including both paintings and sculptures.

The expositions are temporary (one-three months) and the space is available for renowned artists as well as artists at the beginning of their career. 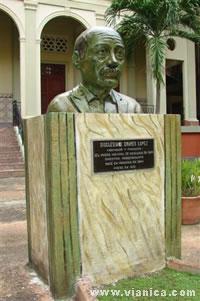 The museum was officially inaugurated on August 28, 1897. It is named after one of the first directors, Dioclesiano Chávez López (1844-1936) who stood out for his passion and support in the fields of archeology, botany, geology, and entomology.

Over time, the National Museum has been set up in different buildings throughout the city, until it was installed at its current place, in the National Palace of Culture. Recently, on August 24, 2006, the museum was re-inaugurated after restructuring its rooms and expositions.

The building of the National Palace of Culture itself has been declared National Monument. Construction of this building started in 1931 and it was officially inaugurated in 1942. It originally housed governmental administrative offices, and it later seated the National Congress. In August 1978 a historical event that made headlines throughout the world took place inside this building when a guerilla Sandinista commando took a group of deputies of the government of dictator Anastasio Somoza in hostage.

After this turbulent period the building functioned as office for the Treasury Department until 1994 when reconstruction work commenced. In 1997 the Nicaraguan Institute of Culture is installed at the palace, and from that point all cultural affairs are headquartered here. 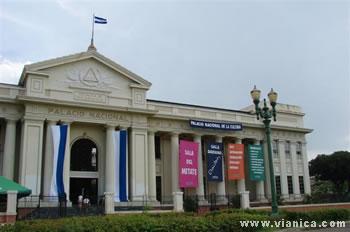 The National Palace, home of the National Museum, is located in the old center of Managua at the Plaza de la República. Neighboring buildings are the old cathedral and the Presidential Palace.

Visitors should head to the lobby of the palace, where bilingual guides are available for foreign visitors. The following prices apply: C$ 3 for primary school pupils, C$ 5 for students of secondary school and universities, C$ 12 for adults, and US$ 2 for foreigners.