The Nicaraguan culinary art dates back to the pre-Colombian times, as you can tell by the names of the most known plates. Back then, during colonial times, the peculiar, creative, and varied Creole menu was the result of the union of these two races. In this type of food, ranging from soups and meats to a diversity of sweets, interesting ingredients are used.

Since its origin, the fundamental basis of Nicaraguan gastronomy has been corn. Thus, its wide usage and derivatives constitutes the culinary inheritance left by indigenous tribes that lived in the area. This fact explains the similarities between the typical Nicaraguan food and those of other countries in the Central American region and Mexico. We all were sons of corn.

Corn, as ingredient, has many different uses: lots of drinks are made from corn, such as Chicha and Pinol; as well main dishes such as Nacatamal, Indio Viejo, and Sopa de Albondiga; and snacks and sweets such as Atolillo and Perrereque.

A World of Ingredients

There are also other ingredients widely used in the Nicaraguan kitchen, mostly local, tropical products. Nevertheless, Nicaraguan culinary creativity is meticulous and open, which enables the utilization of ingredients used all around the world such as tomato, onion, garlic, flour, rice, orange, mustard and mayonnaise, milk and cheese, vanilla and cinnamon, and more.

Pipian, corn, and red beens (to the left), and corn and tortillas (photo to the right).

But what makes Nicaraguan food unique are those local ingredients discussed before. Below follows a selection of those ingredients, some of which are probably unknown to readers from non-tropical countries:

Fruits such as jocote, mango, papaya, tamarind, bananas (used a lot in Nicaragua), pipian, and avocado; roots such as yucca (also of a lot of use in typical national food), and quequisque; herbs such as culantro (also called cilantro), oregano, and achiote.

Another interesting aspect of the Nicaragua cuisine is the meat that is being eaten. Some foreigners, especially Europeans, might find the following hard to believe. From the cow, for example, some dishes are prepares using the tale, the udder, the stomach, or the brain; from the bull, the testicles; from the pork, the skin (which is used to make the famous chicharron), hoofs, and the blood (to make morongas).

In addition – and this is something not appreciated by ecologists – Nicaraguans eat turtle eggs, lizards, armadillos, and boas (boas are eaten mainly in the Central and Northern region of Nicaragua). Do note that all these species are currently threatened with extinction.

The Most Famous Plates 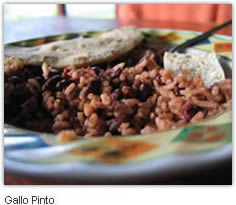 There are a lot traditional Nicaraguan dishes. Each region, according to geographical and cultural characteristics, produced various dishes, drinks, and sweets. Throughout the years, those dishes became known in the whole country. Some cities still are still known as the one that originated the idea of some food and they still specialize in creating this food, but most of the dishes passed to be national dishes. Below you will find an overview of the most famous Nicaraguan dishes.

Gallo Pinto: most people in Nicaragua eat this almost daily and it is considered a national symbol. It is composed of a mixture of fried rice with onion and sweet pepper, red beans boiled with garlic. They are mixed and fried all together.

Nacatamal: a dough which is prepared with ground corn and butter. This is then filled up with small pieces of pork or chicken, rice, potatoes, tomatoes, onion, sweet pepper (all in slices). This mixture is packed in leaves of plantain trees (not edible), tightened with a small thread, that makes it look like a tiny pillow. It is then cooked inside the leaves and boiled during five hours. 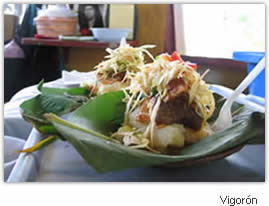 Vigorón: originally from Granada, where it is deliciously prepared. A plate is covered with a part of a plantain tree leaf, on top of which yucca, chicharrón and a salad made out of cabbage and tomato is placed.

Indio Viejo: meat is prepared with onions, garlic, sweet pepper and tomato. In addition, some tortillas are put into water and this has to be ground until they form dough. The meat is shredded and then fried with vegetables, the dough, and orange juice. Finally, you add broth.

Quesillo: originally from La Paz Centro and Nagarote, in the department of León. The quesillo is easy to prepare. A piece of cheese (which is named quesillo) is placed inside a tortilla. This is then wrapped up in a plastic bag. Onions and vinegar are added, and the finishing touch is to put fresh cream and a bit of salt on top.

Sopa de Mondongo: this soup is the specialty of Masatepe, in the department of Masaya. The mondongo is washed with a lot of bicarbonate, orange, and lemon. Next step is to cut it in small pieces and cook it with onion, sweet pepper, and garlic. When the mondongo is soft enough, grind rice is added, as well as vegetables in pieces, such as quequisque, chayote, sweet pepper, onion, corn. This should be kept cooking until the soup is ready. You can eat this with avocado and cheese. 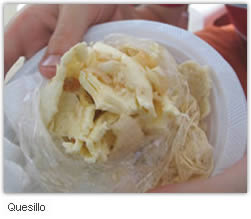 Arroz-con-Piña Drink: for this drink you boil a “four leaf clover”, a pineapple and rice, until the rice is soft enough. The drink is then being cooled and blended, adding water. Afterwards, remove the solid part, leaving only the liquid part. Add a little bit of vanilla, strawberry and sugar, as you desire.

Chicha-de Maíz: this drink needs a process of a couple of days. The corn is left in water for an entire night so it gets soft. Grind it the next day and then place it in water, adding red colorant. The next step is to cook it. When it cools, you add a type of candy called “dulce” and more water. The next day, you add more water and sugar.

Tres Leches: this is a dessert prepared with milk, condensed milk and cream. This is where the name comes from (three milks). You prepare a cake with flour and eggs, and then you add the mixture of these three milks. Finally, place a crown of meringue.

Cajeta de Coco: to do this use coconut, the coconut’s water, yucca and a candy called “dulce”. The coconut and the yucca are cut in thin strings. The water and the “dulce” are cooked until they make up a kind of honey, to which you add the strings of coconuts and yucca. You then mix those and that's it!

Rosquillas: These appetizers are the specialty of Somoto, in the department of Madriz. Corn dough is combined with cheese, egg, butter and lard. You give them a circular form and you bake them until they toast.

In Nicaragua, culture changes from one coast to the other, and the Caribbean Coast also has its part in traditional dishes. Here other important ingredients such as coconut are used.

Rondon: traditionally from Bluefields. Rondon is prepared with turtle meat, fish, and red meat or pork. Sometimes you combine two of these meats. When preparing, cook the meat with pepper, hot pepper, a herb named nargan, onion, sweet pepper, banana, yucca and quequisque.

Gaubul: this is a typical drink in the Nicaraguan Caribbean, almost unknown in the Pacific and center of the country. To create this drink, make a mixture of green banana (cooked beforehand and mashed in water), milk and coconut water, and a little bit of sugar.

Rice and Beans: this is the same as Gallo Pinto and it is prepared in the same way, using rice and red beans. The only difference is that it is fried with oil made out of coconut, which gives the plate a different and special flavor. 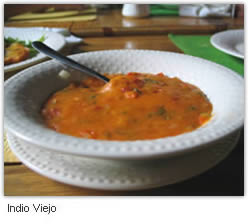 Go ahead and try them!

To some foreigners, Nicaraguan food might seem little inviting, strange, or even unedible. There is an urban tale related to this about a North American who was eating a Nacatamal. When he finished, someone asked if he liked it, and he answered: “It was very good, but the only thing I didn’t like was that the lettuce was too bitter”; obviously, he thought that the lettuce was the plantain tree leaf, with which you wrap the Nacatamal, and which you do not eat!

Some believe that Nicaraguan food is very oily and that juices are too sweet. This is indeed true sometimes. Nevertheless, do not let it scare you off; go ahead and taste the delicious Nicaraguan traditional dishes!