Several beaches in Nicaragua, both in the Pacific and in the Caribbean, are among the few sites in the world where sea turtles arrive - sometimes in huge numbers - to lay their eggs. This interesting event, which is very attractive to international tourists, occurs several times per year. There are, however, several factors that threaten this beautiful natural happening.

Throughout the whole world, there are seven species of sea turtles. Five of those species are present in Nicaragua. The turtle species differ in appearance, size, weight, and habits. Below is an overview of the five species that inhabit Nicaraguan waters.

Where to See The Turtles

At both sides of Nicargua (the Pacific and the Caribbean or Atlantic side) the turtles arrive along almost the whole coastline to spawn. Small groups of turtles, or sometimes even single animals, find a small area in the sand where they dig a hole and deposit their eggs. There are, however, specific beaches where on occasion thousands of turtles arrive in a single night, an event called arribadas.

If you have not seen it with your own eyes, try to imagine three thousand turtles coming from the ocean, invading the beach one by one and all using a small area on the beach to deposit the eggs. This is what happens during every arribada, an event that has been occuring several times a year for ages.

At the Pacific side, the largest arribadas take place at the beaches of La Flor and Chacocente, located in Rivas (the first) and Carazo (the second). Because of the arribadas both sites have been declared Wildlife Refuges. These beaches are placed under supervision and that way the ecosystem is preserved without interference, giving the beaches a virgin character. Many people consider the beaches paradisiacal, despite being visited constantly by tourists and scientists.

The most common turtle at the Pacific beaches is the Olive Ridley Turtle. The Leatherback and the Hawksbill Turtle, however, can also be seen here in much smaller numbers, as well as the Pacific Green Turtle.

The Nicaraguan Caribbean coast possesses a very rich biodiversity. At the coast, islands and islets are surrounded by coral reefs which provide feeding grounds and an impressive underwater fauna in which four of the seven turtle species reside: the Green Turtle, the Hawksbill Turtle, the Loggerhead Turtle, and the Leatherback Turtle.

While the turtles at the Pacific coast only visit the area to spawn, in the Caribbean the turtles live and feed in the Nicaraguan waters and form part of the ecosystem in which they can be frequently observed. There are no specific beaches at this side where arribadas occur, but you can find many turtles feeding or spawning at the Miskito Cays, the Pearl Cays, and at the Indio Maíz reserve.

The different marine turtle species group together to mate at certain places in the ocean. When the female is ready to lay their eggs (spawn), she travels to certain beaches in tropical or warm waters. It is believed that the turtles always return to the beach where they were born.

After arriving at the beach, the turtle starts to slowly explore the sand until she find an ideal place to lay their eggs. Using two fins, she starts to remove the sand which is then pushed away from under her body using the two rear fins. She will dig a circular hole and start depositing her eggs, one or two at a time, until (on average) 90 eggs are laid. 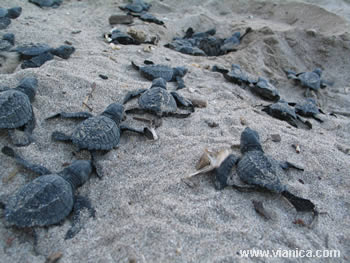 At the end, the turtle mother covers her nest with sand. She will also move some more sand around the nest to further disguise the location of the nest. Finally, the turtle crawls back to sea where she slowly disappears.

The eggs will then be at the mercy of several predators as well as the tide which can bring forceful waves to the beach. After two months the eggs will hatch and the baby turtles will start their difficult voyage to the open ocean. In fact, people have found out that the hatchlings are guided by the brightness of the horizon, which is normally located behind the sea. When many lights are present around the beach, however, the turtles might be attracted by these lights and they will head to a sure death.

The journey from the nest to the open water is the most dangerous part of the baby turtles' lifes. There are many threats to the small turtles, and only few out of the thousands hatchlings survive until adulthood.

Besides natural predators, who actually form part of the natural cycle, the turtles also face numerous problems with people.

The problems experienced by the turtles are mostly related to the poverty that is present among the population living at the coasts. The problems have become very serious, especially at the Caribbean coast.

In Nicaragua, the Caribbean coast has been and still is populated by a diversity of etnic groups like the Mayagnas, the Miskitos, and the Ramas. From their ancestors, they have inherited counting on sea turtles as basic food source and later as a commercial product. The lack of control that exists concerning the exploitation of turtles as natural resource has brought us to an alarming situation. 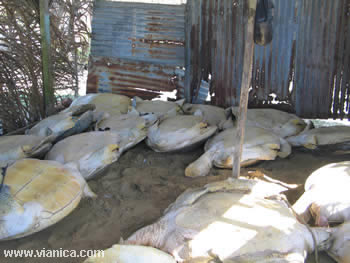 The eggs and the turtle meat form part of the culinary traditions of almost the whole Caribbean population in Nicaragua. The hunt for turtles has been so intense and disorganized that it has been declared illegal, but there has been virtually no enforcement of this law by the authorities.

There are some indegenous communities who have the right to hunt turtles in their territory for their own consumption. There are many people, however, who come from different places to hunt at those areas, and there are also local residents who do hunt the turtles in order to sell instead of eat them.

Three other major problems include: fishing nets in which many turtles get trapped and drown; the destruction of their natural habitat; and the usage of turtle shells, leather, oil, and calipee to produce ornaments, jewelry, and other products.

In the Pacific, the major problem is the turtle consumption and mostly the commercial egg consumption. The coastal dwellers, generally very poor due to the low income that their fishing activities bring, have found an additional food source in the eggs and above all they found there was a very high demand for the eggs. The eggs are easily sold to seafood restaurants or simply to people on the street.

At the beaches of La Flor and Chacocente, protection of the turtles and the area in general is managed by civil organizations like the Cocibolca Foundation as well as the Nicaraguan Army. At these sites an agreement has been made with the local residents which stipulates that the residents can take a certain number of eggs in exchange for collaboration regarding the protection of the turtle nests. At this moment, this agreement seems to lead to results.

In other zones civil organizations have set up turtle nurseries. They exist in Chacocente and in the Cosigüina Peninsula. In the latter, the foundation called LIDER collects the eggs at several beaches and moves them to a nursery at the El Rosario beach where they are protected and studied, and the birth of the turtles is also monitored. This process is repeated year after year during the nesting season. The most frequently encountered species is the Olive Ridley turtle, and Loggerhead turtles also show up every now and then.

Despite of these results, at the other Pacific beaches where turtles come in smaller numbers they are given no protection whatsoever and here almost all eggs are taken and many turtles are killed. Sadly, the two species that frequent this coast are both in danger of extinction.

At the Caribbean coast the problems are more acute as a result of the cultures that value the consumption of turtle meat. There are national and international organizations, like the Wildlife Conservation Society, who try to protect the turtles that are in danger of extinction as well. The Wildlife Conservation Society (WCS) aims to decrease poaching and massive consumption of turtle meat and eggs. In addition to making the local population aware of the consequences of turtle meat and egg consumption, the WCS also monitors the turtle population and tracks movements and migration patterns. 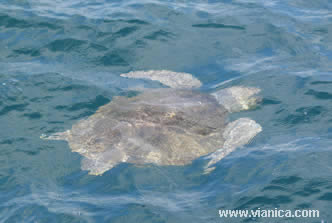 An attitude change of the population living in the turtle-nesting territories is an important goal. A recent finding to take into consideration is the following:

According to a study realized by the World Wildlife Fund in Africa, Asia, Latin America, and the Caribbean, tourism income generated by marine turtles is almost three times as much as income generated by selling products derived from the turtles (eggs, meat, skin, shell).

In this study, nine sites at which turtles had gastronomic and commercial value were compared to nine sites where the turtles attracted tourists. The results are impressing: the average income for a region where turtles and eggs were sold and eaten were estimated for a certain year at US $580,000. In a region where the turtle population was used to attract tourists, the estimated revenue for that region amounted to US $1,650,000 during the same period.

We would like to invite our visitors to visit the beautiful beaches where you can enjoy the magnificent phenomenon of massive turtle arrivals and the birth of thousands of baby turtles, and we would like to encourage you to get to know the people who are concerned with the protection of the turtles like the Cocibolca Foundation and the Worldlife Conservation Society.

When watching turtles, please take the following guidelines into consideration to ensure that the turtles can safely come to the beach and lay their eggs.