There were several factors that made the colonies decide to split from Spain: the independence of regions in the north (from England), the French revolution that brought new ideals, the strong control and tax system imposed on the region by the Spanish crown, and the progressive weakening of this same government.

In South America, and during a certain period also in Mexico, the mestizos and American creoles (Spanish born in the new world) started bloody wars against the crown to obtain their independence. In Central America the situation was different. 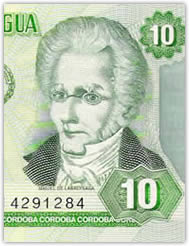 Nicaragua formed part of the Spanish ‘Captaincy General of Guatemala’, which included the territories from Costa Rica up to Chiapas (nowadays a region in the Yucatán Peninsula in Mexico).

The independence ideas reached the region and the leaders started a negotiation process that ended in September 1821, when they wrote an Act of Independence which was recognized by the representative of the Spanish crown. Among the people who were the driving force behind the Central American Independence was the Nicaraguan Miguel Larreynaga, who is still remembered on the ten córdoba bills.

Now that Spain was out of the picture, Nicaragua and all other regions from Central America decided to join the Mexican Empire, but this only lasted a few years. The small countries from the isthmus therefore decided to form the ‘Federation of Central American States’, which did not last long either due to particular interests of the leaders of every province. Consequently, Nicaragua gained complete independence on April 30th, 1838.

The independence brought forth a continuous conflict over power by the strong cities of León and Granada, and their political parties (León housed the liberals and Granada the conservatives).

A few years later, this confrontation provoked a historical incident which threatened the new nation. During the conflict, the conservatives got a mercenary army involved from North America, headed by William Walker. After obtaining military stability in the country, William Walker decided to take over control of the country and declare himself president with the idea to annex the region to the United States.

The national groups normally opposing each other decided to unite against this threat and with the support of the Central American armies they started a national war that saw its historical climax at the patriotic battle at Hacienda San Jacinto.

This battle took place in 1856. A small group of Nicaraguan army men was in charge of slowing down the troops of the filibuster. They were located at a small cattle ranch situated a couple kilometers north of Managua, waiting to repulse a North American army that was greater both in number and arms.

The battle started at dawn and the patriots took some hits but maintained their positions. Their arms were old and they frequently failed to function. An ingenious action, however, brought them a surprising victory. When the battle became more violent and the Nicaraguans lost their positions, the horses that were located at an enclosure on a hill within the farm were set free. Upon hearing this sound, the mercenaries thought cavalry reinforcements of the enemy had arrived and aghast the troops fled the scene.

Another outstanding heroic achievement during this battle was the action of the Nicaraguan sergeant Andrés Castro. He experienced difficulties maintaining his position and his arms were jammed. When he saw a mercenary soldier cross a trench, he took a rock and threw it so violently at the head of the enemy that the soldier was killed by the blow.

The famous patriotic battle at San Jacinto signified the start of the filibuster’s defeat throughout the country. The battle took place on September 14, coincidentally one day before the independence celebrations. 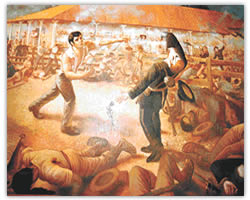 The stone of Andrés Castro, perpetuated in a mural in the Hacienda San Jacinto museum.

Currently, September is celebrated as a patrimonial month, and throughout whole Nicaragua people hang out the blue and white flags at their houses. The commemorative activities start at schools and institutions the first of the month. Below follows a chronological overview of the activities.

September 11 – every year, during the patrimonial month, a burning torch travels through Central America, from Guatemala to Costa Rica, transported by feet and going from hand to hand in every one of the countries. The torch reaches “Las Manos”, the Nicaraguan border with Honduras, on September 11, and is exchanged between the ministers of Education from Honduras and Nicaragua (in the morning). The torch then starts to travel the country over the Pan American Highway, and it goes from hand to hand by the best students from the schools of each municipality and other outstanding individuals who will each run with the torch for no more than 100 meters. The total run is 387 kilometers and it involves more than 8 thousand students.

September 12 – this day, at 9 AM, the torch is received, generally at the National Cultural Palace, by the President of the republic or by the Minister of Education accompanied by other government officials. Folkloric events take place in the morning as well.

September 13 – at the southern border 'Peñas Blancas' the torch changes hands between the Nicaraguan and Costa Rican Ministers of Education. This day, at 6 PM, the national flag will be hung out in all educational centers and principal institutions. Furthermore, the national anthem is broadcasted in the media and performed throughout the country.

September 14 – at 6 AM the flag is once more hung out commemorating the anniversary of the independence of Central America and the battle at San Jacinto. This day the central act takes place, starting in the morning and led generally by the President of the Republic. Several years ago, the act took place at the National Stadium, but this limited the number of spectators. In the past years the event therefore took place around the Masaya Highway or in the old center of Managua. During this event, the Presidential Medallion is awarded to the best students and teachers from the country. Furthermore, a parade is formed by 100 schools from the capital (approximately 15,000 students) with the marching bands as well as bands from the National Army and the Police.

September 15 – the Act of Independence of Central America is read in all state schools throughout Nicaragua, in an act of commemoration. This final event ends the series of activities related to the battle at Hacienda San Jacinto and the Nicaraguan independence. Part of the celebrations consisted in the past years also of the ‘Festival Nacional de Bandas Rítmicas’, generally celebrated during the first days of September. These activities now take place on different dates throughout the year, during other months than September. These bands are groups that combine music and choreographic rhythms, composed of students from schools from throughout Nicaragua. Every group represents its school and is selected during departmental contests. The groups compete in front of a juror who will choose the best musical group of the country. The finale of the festival takes place at the National Stadium in Managua, and is open to the public.

Many thanks to Freddy Molina, Public Relations, Ministry of Education