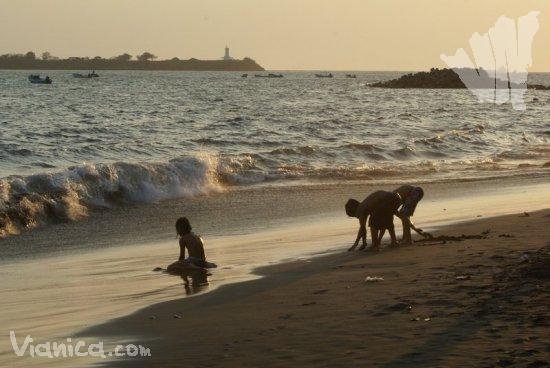 In addition to having the main seaport of the country in its coasts, this small municipality also has several interesting sites. There is a nice central park in the urban area, where a massive seafood gastronomical fair is celebrated annually. Also, Corinto has simple but comfortable hotels, restaurants and nice beaches, from where visitors can travel to small inhabited neighbor islands. The Paso Caballos Estuary is located outside the city.

It does not look like it, but the city is located on an island, which is separated from the mainland by a estuary. The small, elongated urban area has a hot weather and a lively ambiance in its center, market and commercial zones. However, the rest of the neighborhoods and the port are very tranquil. Also, there are bars and several eateries. The nearby beaches are also an attraction here.

An interesting site is Costa Azul, located a few blocks from the city center. There are seafood restaurants with a good ambiance. Since this is also the area where fishermen leave, it is a good spot to buy fish for reasonable prices. Despite the rock formations, the beach of Corinto is suitable for a good swim. One can see the huge international ships passing by before entering the port.

From Costa Azul, tourists can see many islands of the bay of Corinto. The inhabited islands can be visited by arranging a tour with the municipal government or with local fishermen. The most famous of them is the island of El Cardon, where a lighthouse and the ruins of a house where the famous Nicaraguan poet Rubén Darío lived (1867-1916) are located. It is said that Dario wrote the poem "A Margarita" in this island. Castañones, Encantada, Guerrero and Machuque are also interesting islands.

The traditional festivities of Corinto are celebrated in honor of Santa Cruz, from April 24th through May 4th. There are various activities during these days, such as processions, parties and the "Gastronomical Festival of the Sea", which receives visitors from other places of the country, neighboring nations and Nicaraguans living abroad. Different seafood dishes are sold by a group of cooks and cultural performances are organized in front of the fair. The goal is to collect funds for the "Hogar de Ancianos Santa Educiges" and other social activities held by the Santo Tomas church.

The island of Corinto is located between an estuary zone and the open sea. One of the estuaries is Paso Caballos, located in front of the entrance of the city and accessible thanks to a road that connects it. The estuary has restaurants, in addition to extensive beaches with calm waters and a nice view in the horizon. The other estuaries are also attractive, but rarely explored.

To get to Corinto, you should take the roundabout of the city of Chinandega that leads you to this port. There are 25 kilometers of paved road in good conditions between the two cities and frequent daily buses that connect them as well. Managua is 152 kilometers away. Several buses leave from the Roberto Huembes market. When traveling on private transportation, you must first get to León, then to Chinandega and finally take the roundabout to Corinto, turning to your left.