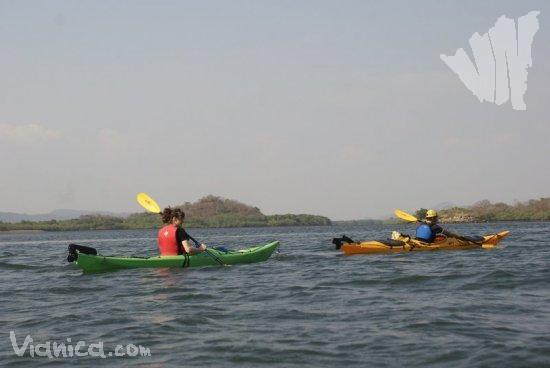 Either it is in the urban area or the rural one, this municipality has various interesting attractions. The urban center is the city of El Viejo, where visitors will find a pretty basilica with colonial objects. Its beaches, which are placed in the Pacific, are wide and accessible. Furtheremore, there are three natural reserves: the Padre Ramos Estuary, Cosigüina Volcano and Estero Real.

The city El Viejo has a few colonial buildings. The basilica stands out from the others due to the antique decorations and objects placed in its interiors. One of them is a revered image of the Virgin Mary, which receives hundreds of devotees each December 6, for the traditional 'lavado de la plata'. Dozens of people wash the silver objects of the image and its altar, who have been given by devotees throughout the years and generations. Hundreds of visitors pray and sing to the virgin, thanking or asking for miracles.

Other attractions of the city are its famous handmade sweets, which are sold in different places of the urban area. Furthermore, the festivities in honor of San Roque (August 1st to 17th) are also a good time to visit. There are processions, equestrian parades and parties at night.

This is the biggest municipality in the department, with long coasts in the Pacific and the Gulf of Fonseca. The most popular of them is Jiquilillo, which has an elongated sandy coast with private houses owned by people from the cities, local fishermen and some surfers with their hotels. It generally remains empty. However, it is invaded by national tourists during Holy Week. The beaches of Aserradores and Santa Maria del Mar are located near Jiquilillo.

A few small estuaries and the Padre Ramos Estuary Natural Reserve are located North of Jiquilillo beach. The reserve has calm waters and extensive well-preserved mangrove forests, which are home to various local and migratory seabirds. There are some rustic bars and restaurants, and kayaks to explore the area.

The Cosigüina peninsula is located in the north end of El Viejo. The Cosigüina volcano, another natural reserve, is situated inside it. Even though the volcano is not that high and it does not have a taper shape, it does have forests on its slopes and summit. In addition, there is an inaccessible beautiful lagoon inside it. Climbing the volcano and seeing its lagoon, as well as panoramic views of the Gulf of Fonseca, El Salvador and Honduras, is an adventure itself.

The nice and secluted beach of Mechapa, in addition to wetlands and springs, are also located in this peninsula. The 'Islotes de Cosigüina', which are huge rocks in the open sea and home to seabirds are located here as well.

The third natural reserve of this municipality is Estero Real, much more extensive but less accesible than the other two. Estero Real has giant mangrove forests and wetlands, where hundreds of seabirds can be seen.

There is a paved road that starts in the city of Chinandega and takes you to El Viejo, with a fluent connection when traveling in public transportation. From El Viejo, there is a road (North) heading to the town of Potosí, located in the Cosigüina peninsula. Rural trails also start in this same road and take visitors to other beaches (all of them with signs). There less frequent buses that connect these beaches with the peninsula.

When traveling from Managua, you must get to Chinandega first and then to El Viejo. There are direct buses to El Viejo at the Israel Lewites Market, but you can also make a stopover in Chinandega.