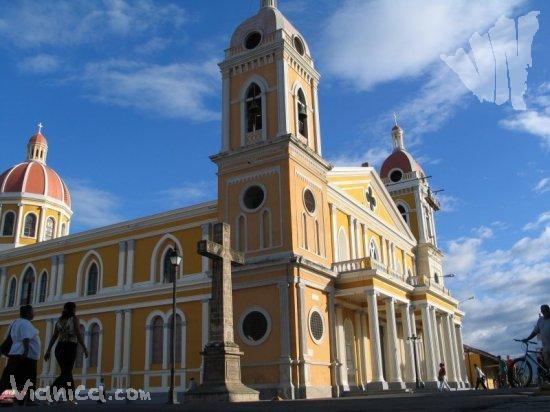 The municipality of Granada is home to the oldest colonial city established on mainland. Its territory includes lagoons, an archipelago, natural reserves, the Mombacho Volcano and an elongates shoreline in Lake Nicaragua. Its rural area, which is constituted by 17 villages and the Zapatera Island, is known for ecotourism and petroglyphs. Its religious festivities are held in honor of the 'Virgen de la Asunción', from August 14th to 20th.

The city of Granada has had a hectic history. Founded in 1524, it had always had a strategic position due to its shores in Lake Nicaragua. However, this also made her the victim of several pirate attacks during colonial times. It was sought, captured and destroyed by American filibusters, and was named Nicaragua's capitol in multiple times, fighting the title with its eternal rival: the city of Leon. Nowadays, Granada has been evolved into a tourist destination for all budgets and the favorite cities of foreigners.

The urban center preserves the architectural style that was given by its first Spanish inhabitants. Imposing buildings, such as the cathedral, surround the renowned Central Park, where visitors can also taste the famous 'vigoron' (a traditional national dish made of yucca, pig fat, and salad, which is usually drank with a cacao drink). The park is also known for the many carriages that offer short tours through the city.

An interesting site in Granada is the Convento San Francisco Museum, which was the first church and convent built by Spanish colonists in 1529. Here, one can find antique pieces and information about the ancient pre-Columbian culture of the area, in addition to statues that were found in Zapatera Island, which used to function as a religious indigenous center. Another attractive museum is the Spanish fortress of 'La Polvora', located in the Western side of the city.

The famous pedestrian street of La Calzada is located on the East side of the Central Park. Here, one can see many colorful wide colonial houses that have been turned into restaurants, bars and hotels. The 'malecón de Granada' is located at the end of this street and offers a panoramic view of the stunning Lake Nicaragua.

The tourist center of Granada is located few meters away from the 'malecón' and this one features another great attraction: the islets. This a group of more than 365 small volcanic islands that surround the Asese Peninsula. Several migratory birds and a variety of fauna and flora inhabit the archipelago and most of its islands are private property, some of them have hotels and restaurants in them. Also, it is possible to arrange a tour around the islets, whether it is on a boat or a kayak. Tourists can also practice some water sports on the lake.

Since 2005, Granada became the headquarters of the International Poetry Festival. Many renowned international poets attend the event, which is the biggest celebration that the country makes to poetry and culture. Throughout each of these editions, the participants sign a petition to UNESCO, so that the city is declared "Cultural and Natural World Heritage". In addition, organizers aim to promote cultural exchange and promote the Nicaraguan poetry worldwide.

The religious festivities of Granada are held in honor of the 'Virgen de la Asunción', from August 14th to 20th. Religious processions, equestrian parades, games, crownings, traditional food and drinks, parties, among other activities are organized during these dates. The most important day is August 15th, which is when the patron saint tours the streets of the city and then returns to her original spot: the Xalteva neighborhood.

Stations of the Cross in Granada

Just as other Nicaraguan towns and cities, the Holy Week is celebrated with many religious traditions. The only difference is that the community of Chocote, located among some of the Granada islets, organize an aquatic and quite original Stations of the Cross. Instead of walking on the streets, devotees sail the channels of the lake and stop at the stations located in small docks.

There are three ways to get to Granada. The first one, and commonly used by travelers, is the 'Carretera a Masaya', which is in good conditions. The other is by taking the Pan American Highway when you are coming from Nandaime. This will take you to the 'Las Flores' roundabout and then you will turn right and continue until reaching Granada. If you are coming from Boaco, you could go to the town of Teocolostote, pass by Malacatoya and continue to Granada.

There are buses traveling from Managua on public transportation, the easiest way is to take a bus either at the UCA bus station or at the Roberto Huembes Market. Masaya's municipal market also has buses to Granada, as well as the city of Jinotepe (Carazo).