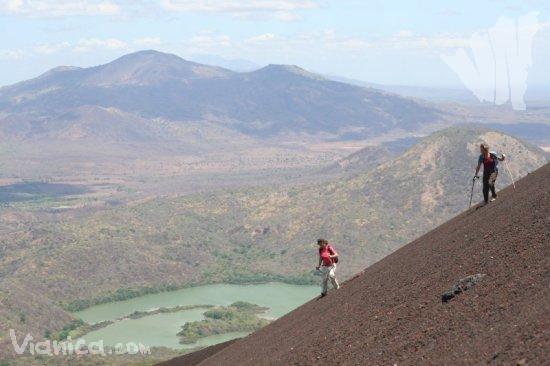 Despite the fact that the most important attraction in La Paz Centro are the historical ruins of Leon Viejo, this municipality also has a national historical landmark, as well as many rivers, lagoons, thermal spots, a cultural center, a municipal library and the Momotombo Volcano. Its religious festivities are held in honor of San Nicolás de Tolentino.

Because of its location, the municipality of La Paz Centro is one of the most important urban centers located in the Carretera Nueva a León. It is said that La Paz Centro was formed after the migrations caused by the activity of the Momotombo Volcano, which coincides with the date of its foundation (1610). From this moment on, the municipality has several names, but it was until 1869 that it was called "Villa de la Paz". The name is related to the fact that a peace protocol was signed in the territory in order to end a civil war that was happening during that year.

La Paz Centro is mainly known for three reasons: quesillos, the Momotombo Volcano and the ruins of Leon Viejo. A quesillo is a delicious Nicaraguan dish made with a hot tortilla wrapped around a type of cheese (called quesillo), onions and fresh sour cream, which is generally bought with a cacao drink. The neighboring municipality of Nagarote is also famous for this dish, and this has led to a dispute between the two places. The dispute continues to this day, and people keep eating quesillos wherever they like.

The Ruins of Leon Viejo, on the other hand, give the municipality a tourist destination with a great historical and architectural value. In fact, these are the remains of the first city of Leon, which was abandoned by its inhabitants in 1610 when they felt threaten by the possible eruption of the Momotombo Volcano. The volcanic activity slowly covered the site with sand until it was covered entirely by it. In 1960, a scientific excavation discovered the ruins of the city, which was declared World Heritage Site by UNESCO in 2000.

The Momotombo Volcano is one of the most iconic natural elevations in the country. It can be easily seen from different sites of the Pacific Region, due to the fact that it is located on a large valley and the shape of its cone, which is almost perfect. Climbing is an unforgettable adventure, as well as a demanding one. The island- volcano called Momotombito is located near it and can be also climbed after reaching it on water transportation (if visitors do not have their own, they can arrange a tour with local fishermen from coastal villages).

The inhabitants of La Paz Centro celebrate, each September 10th, their religious festivities in honor of San Nicolas de Tolentino. There are religious processions, popular parties and other activities on this day. The urban center features a church that was declared national monument, which is also dedicated to this saint.

La Paz Centro is located 56 kilometers away from the city of Managua, when traveling on the 'Carretera Nueva a León', which has been recently renovated.

There are frequent buses leaving at the UCA bus station and at the Israel Lewites Market, both located in Managua. You must ask the driver to drop you off at the entrance of the municipality.