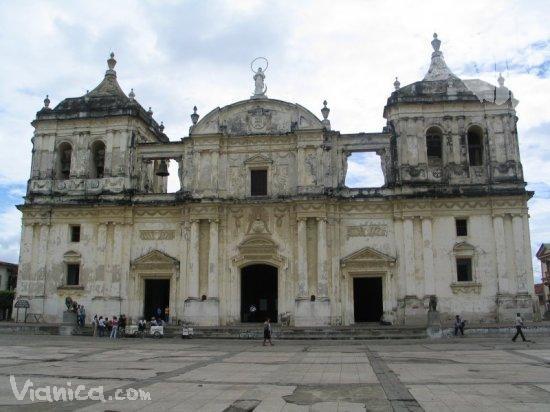 Leon has one of the most impressive colonial cities in the country. Here, tourists will find hotels, restaurants, bars, tour operators, museums, cultural centers, several colonial churches and the largest cathedral in Central America. Leon also has a couple of famous beaches: Poneloya and Las Peñitas. The Juan Venado Island Natural Reserve is located close to the last beach, featuring abundant marine life and mangrove vegetation. The municipality is also famous for the festivities held in honor of Virgin Mary (December) and the colorful sawdust carpets than can be seen during Holy Week (Easter).

Originally, the city of Leon was founded in 1542 by the Spanish conqueror Francisco Hernandez de Cordoba. However, its inhabitants moved it to its current position in 1610, due to the intense activity of the Momotombo Volcano.

With a new geographical position, Leon had a flourishing productive life and became an important city governed by Spanish colonizers. On August 21st, 1685, a band of pirates - led by the French William Dampier - attacked the city. The invaders left the cathedral, many churches, public buildings and colonial houses in deplorable state.

After the attack, the inhabitants managed to stop the pirates before they could escape by sea. Since Dampier was an architect, they forced him to rebuild the cathedral and the other buildings he and his band destroyed during their visit.

Historically, Leon has always been one of Nicaragua's most important cities, both economically and socially. In fact, the city functioned as capital of the country on multiple times after the independence (1821), alternating the title with Granada, its eternal rival. The dispute continued until Managua was declared the only and permanent capital of the country.

The city also played a major role when Nicaraguans fought against the dictatorship of the Somoza family, back in the 70's. There was an important social movement in Leon, which mainly emerged within the students from all over the country that were taking classes at the university of Leon, one of the first in Central America. Some museums and monuments, built as a homage to this period, can be seen throughout the city.

The 'Basilica Catedral de La Asunción', commonly known as the Cathedral of Leon, symbolizes the center of the city. The building is worth a visit not only for the impressive architectural style, but also because it is home to important mausoleums of famous characters, such as Ruben Dario, who is considered the "prince of the Spanish literature".

The cathedral is located on one side of the Central Park, which is another reference within the city. The area is frequently visited by locals and foreigners who enjoy the shadow of its many trees. Also, the park features many crafts sellers, as well as improvised food and drink stands.

A good option is to take a walk and see the churches of Leon. The most visited ones are La Recolección, La Merced, El Calvario, Sutiaba, Laborio and Saragoza. Nonetheless, if visitors have plenty of time, visiting the churches of Guadalupe, San Francisco, San Felipe and San Padre, will be a good decision, since they are part of the architectural and historical heritage of this urban area.

Furthermore, the city is also home to interesting museums and cultural centers. One of them is the Ruben Dario museum, which is actually the house where the famous poet lived during 14 years. Other attractive spots are the Museum of Legends and Traditions, the Adiact Museum, Museo Archivo Alfonso Cortes, the Ortiz-Gurdian Foundation, Casa Salud Debayle, the Entomological Museum, Museum of Sacred Art of Sutiaba, and many others.

The inhabitants of Leon are mainly catholics. Because of this, their religious celebrations - organized during Holy Week and December - are some of the most important in the municipality. The Stations of the Cross and the Judea (theater play about Jesus' life and death) are represented in the streets of Leon's cities and villages. Furthermore, the streets of the Sutiaba neighborhood are decorated with colorful sawdust carpets. In addition, many delicious sweets and traditional dishes are eaten/sold during this season.

Holy Week is one of the busiest seasons in León, not only for the religious festivities but also for the hundreds of Nicaraguans who visit its famous beaches. Swimming in the refreshing waters, starying at beach hotels, tasting local food, partying at the coast and taking tours are some of the activities of this hectic season.

La Gritería is another significant religious festivity in Leon, if not the most important, celebrated in honor of the Virgin Mary. Several altars are placed outside the houses, everyone waits until 6:30 pm on December 7th and listen to the yell saying: "¿Quién causa tanta alegría?" (Who causes so much joy?), which is replied by a massive response saying: "¡La Concepción de María!" (Mary's Conception!) This is the moment when bombs, rockets and fireworks are heard and seen, and thousand of devotees who out on the streets singing songs to Virgin Mary, expecting sweets, drinks, food and toys.

The 'Carretera Nueva a Leon' is the fastest way to get to the city of Leon when traveling from Managua. Public transportation can be taken at the UCA bus station or the Israel Lewites Market.

The same road can be taken to travel to this city by private transportation. It starts near 'Carretera Sur' (Managua) and passes by the municipalities of Mateare, Nagarote, La Paz Centro, among other towns of the department of Leon. After driving for one hour, you will get to the Izapa split, which is where the old and the new highway come together. Once there, you have to turn right.