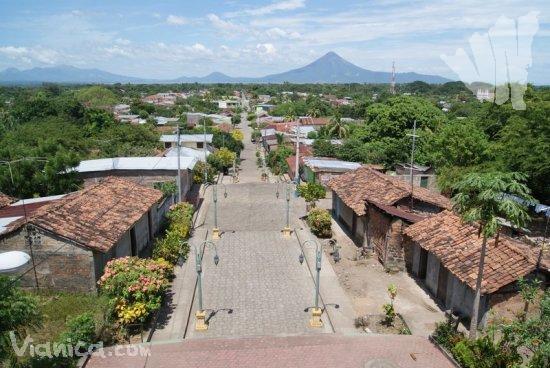 Famous for its quesillos (cheese, sour cream and onions rolled in a tortilla), Nagarote is the traditional stopover of people traveling to/returning from Leon and Chinandega. The municipality has an old church that was declared national historic landmark, a central park, several beaches (some of them with hotels and restaurants), a port, a viewpoint, and the fame of being one of the cleanest municipalities in the country. The traditional festivities of the place are celebrated from July 19th to 28th, in honor of Santiago Apostol.

Traditionally, Nagarote is known for its quesillos (a traditional dish made of a piece of cheese wrapped in a tortilla and flavored with onions and sour cream). But beyond that, and the competition that has emerged with the neighboring municipality of La Paz Centro, Nagarote also has a variety of cultural and tourist attraction yet to be explored.

The word 'Nagarote' has two possible meanings. One of them is translated as "In the way of the Nagrandanos"and comes from the indigenous Chorotega language&#8203;&#8203;. The origin of the other one relates to the words "nagualli-otli", which is interpreted as "Path of Witches". In either case, an interesting fact is that the municipal flag of this town features "nagualli-otli" its center.

Nowadays, the urban center of the municipality is the city of Nagarote. There is a wide central part with an old church that was built in 1575 and is dedicated to Santiago, patron saint of the city. The Museum-House of Culture is located near the central park. It has an auditorium and a collection of 40 pieces made with the branches of the famous Genízaro, which is considered the oldest tree in Nicaragua (about 1,000 years old).

A nice viewpoint is located on another site of this small city. It has a monument dedicated to the millennium. From there, one has a wide panoramic view of the perfect cone of the Momotombo Volcano and the tile roofs from the houses of the city. It is possible to climb to the monument and sit in the terrace located on the back.

Nagarote has four beaches that are commonly visited during Holy Week. One of them is El Velero, situated a few kilometers South of Puerto Sandino, a major cargo point in the Pacific littoral. Despite the fact that the majority of its coast is covered with private houses, it is possible to stay at some hotels and enjoy the local food of the restaurants of the area.

Another beach of this municipality is El Tránsito, located South of El Velero. The main difference between these two is that El Tránsito has a fishing village, but the lodging options are not as diverse as in El Velero. Miramar and Playa Hermosa are the other two destinations to visit and still little visited by foreign tourists.

If visitors prefer fresh water, a good option is to go to the Tamarindo River, situated in the Southern area of Nagarote. One can find wide natural ponds and travel here on small boats that can be taken at Puerto Sandino.

This used to be a secondary port in Nicaragua's Pacific area. Nowadays, it is frequently visited by surfers due to the quality of its waves. In addition, it has an estuary that preserves its natural state, and represents an important site for animals and plants.

An interesting thing about the town is its multiculturalism. A great quantity of people from the Atlantic Coast moved here when the port had a better economical activity, and Puerto Sandino became a space of cultural mix. While visiting, you might listen to misquito (Caribbean indigenous dialect) or creole.

Nagarote is located 42 kilometers West from the city of Managua. You can take public transportation either at UCA or the Israel Lewites Market. You should tell the driver to drop you off at any of the two entrances of the city, located in the 'Carretera Nueva a León'. Once there, you can take a moto-taxi to get to the center of Nagarote.