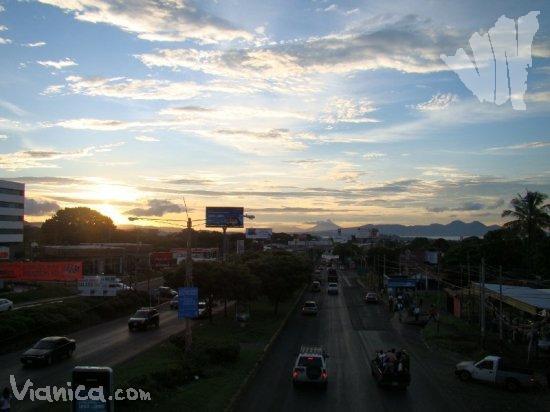 Located in a valley that goes from the 'Sierras de Managua' (South) to the shores of Lake Xolotlan (North), this municipality is mainly occupied by its capital city, which is the administrative and political center of Nicaragua. Managua has its own personality: its chaotic design gathers several modern residential areas, poor settlements, volcanic lagoons, shopping malls, a hectic nightlife, hotels, restaurants and tour operators.

Green prevails in the city of Managua. Visitors will find it in boulevards, sidewalks, parks, roundabouts, gardens, courtyards, neighborhoods...There are trees, plants and grass everywhere! Either on an airplane or at the highest points of this territory, tourists will always see a large green mantle that usually contrasts with the roofs, streets and facades of the multiple buildings of the city.

Managua became capital city in 1852, when the newly independent nation decided to end the eternal competition between the colonial cities of Granada and Leon, which had been capital cities in previous times. However, the title became effective until 1857. Since then, Managua is the largest, most powerful metropolis in Nicaragua.

The city not only has one center but multiple ones. The area that surrounds the Ruben Dario roundabout (Metrocentro), located in the first kilometers of the 'Carretera a Masaya', is one of them. Here, visitors will find shopping malls, cinemas, restaurants, hotels, banks, offices, universities and residential areas. This is the most active part of Managua, either during the day or night. Along the same highway, there are multiple entrances to other shopping malls, good restaurants and popular eateries.

Since Managua is located in an area that is crossed by many seismic lines, it is frequently threatened by small earthquakes. Actually, the old urban center was seriously damaged in 1931 and 1972. The first earthquake destroyed a great part of the colonial city, and the second one collapsed the old and very attractive urban center of a modern, flourishing capital. Nowadays, a lot of elder people still talk about the "old Managua", which can only be seen in old photographies.

The chaotic growth of the city started after the earthquake of 1972, mainly due to the inefficiency of governmental authorities that ruled the country after the revolution. This earthquake is also one of the reasons why there aren't many tall buildings in the city, but 'Managuans' are used to the frequent tremors. Some of them get scared, others just enjoy the experience.

Managua's historical center still preserves some attractions around an area that is know as 'Plaza de la Revolución' (Revolution Square). The National Palace of Culture, together with the Centro Cultural Managua (ruins of the 'Gran Hotel'), are located here. Both buildings work as the headquarters of the Nicaraguan Institute of Culture (INC) and include public places like art galleries, the National Museum and the National Film Archive.

The ruins of the old cathedral are also part of this square, but remains close due to its fragile state. Furthermore, what used to be the presidential house, known as the 'Casa de los Pueblos', is also located here. The square is enclosed by a nice Central Park that has benches, lots of trees, kiosks and mausoleums.

A monument dedicated to Rubén Darío - renowned national poet - stands on the Northern side of the square. The elegant national theater, which is the largest house of culture in the country, lies behind it. Here, Nicaraguans and foreigners attend musical, theater and dance performances, as well as paintings and sculpture exhibitions.

The shore on Lake Managua is only a few meters away from the historical center. The pollution levels make it impossible to take a swim here, but the landscape and the surrounding area have a lot to offer. For example, there are many restaurants and popular bars on the waterfront. The Salvador Allende Port is situated right in front of the coastline, offering a variety of restaurants, sport courts and a dock. One can also take a ferry that goes through the lake at this port. The 'Plaza Juan Pablo II' is located near the area and is frequently used to install amusement parks.

Other important attractions can be found towards the Southern area of the historical center. Some of the buildings that survived the 1972 earthquake can be seen when taking a walk or driving around. Also, the National Arboretum, which exhibits a wide variety of trees of the country, is located a few blocks away and a commercial center with a shopping mall, hotels and restaurants is also part of the scene.

The Tiscapa Lagoon is situated at the edge of the old historical center. This is a very attractive volcanic lagoon, which is surrounded by wooded slopes and is located right in the hearth of the capital city. The Loma de Tiscapa Historical Park lies at the highest point of the old crater, where one can find a small museum, a bar, lots of benches, a playground and - most importantly - one has impressive views of the old historical center, Lake Managua, the lagoon and a portion of Managua's modern center. Furthermore, locals and foreigners can take a canopy tour located in this lagoon. This canopy has three long cables that go down to the lagoon and to the old tourist center. Also, if visitors prefer hiking, there's a single trail that goes around the lagoon, from where one can see turtles, birds and iguanas.

And last but not least, the Baseball Stadium is the headquarters of several sport encounters between the teams of the Nicaraguan Professional League. It is also home to Managua's baseball team, called 'Los Indios del Boer', which is one of the most famous, beloved and hated teams by many Nicaraguan fans. There is a small outdoors museum situated in front of the stadium. It displays graphic information and some antique relics from the Sandinista Revolution.

Managua offers has a diverse cultural offer. In addition to the places we mentioned before, there are other centers spread in its territory. The 'Huellas de Acuhualinca' Museum, which is located in the neighborhood of the same name, displays many antique, local archaeological pieces. The 'Las Palmas' Park is surrounded by three cultural centers: the Justo Rufino Garay Theater, the Victor Romeo Theater and a contemporary dance school. There are other spaces with constant artistic activity, such as the Bernard Marie Koltès Theater in the French Alliance, the Spanish Cultural Center in Nicaragua, the Nicaraguan Dance Academy, the Biblioteca Alemana Nicaragüense, the Batahola Sur Cultural Center, Galería Códice, among others.

There are several popular markets spread throughout the urban center. These are crowded shopping malls where one can find all kinds of items. Due to their position in town, some of them also have bus terminals offering transportation to almost each region of the country. The 'Mercado Oriental', located near the old city center, is considered the biggest in Central America. The Roberto Huembes Market (Southeast) has a complete section of handicrafts of all kinds, sizes and rates.

Managua's nightlife is another attraction. It is possible to find different bars, restaurants, karaoke salons and dance floors in almost each site of the city. Also, there are several clubs for all kinds of clients. Despite the fact that the city has a lot to offer entertainment wise, two renowned nightlife zones are the Bello Horizonte roundabout and Zona Hippos.

But Managua does not end here. There are many sport areas, such as paintball and football courts, establishment with pools and others with electronic games. Moreover, the Asososca, Nejapa and Acahualinca lagoons are also interesting destinations.

A colorful cultural event happens during Managua's religious festivities, which are held in honor of Saint Dominic, affectionately called 'minguito'. The most important dates are August 1st and 10th, which is when an equestrian parade and the procession of the saint are held. Many folkloric manifestations, as well as traditional dances and philharmonic bands are part of this massive event.

As every metropolis in the world, this capital reports frequent cases of accidents and assaults. It is also true that the urban center does not offer a pedestrian infrastructure, and that the vehicles do not give priority to pedestrians. Despite of that, it is not true that Managua is a dangerous city that should be avoided at all costs. There are dangerous places that shouldn't be visited, but the city is one of the safest in Central America.

Managua is easily reachable by land or air. The Pan American Highway crosses it and its very easy to get here from either the Northern or the Southern part of the country.

The Augusto C. Sandino International Aiport is located in the city and represents the main entrance to it. Many direct or connecting flights land at this airport. Airline companies such as American Airlines, Continental Airlines, Delta Airlines, Copa Airlines, Taca and Spirit Airlines will bring you to this destination.