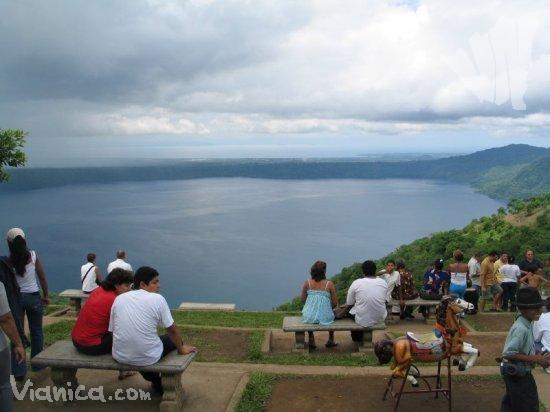 Its urban center is the charming city of Catarina, adorned by several nurseries and a magnificent viewspot. In the city, you will find art workshops and the 'Villa de Artesanías's with lots of shops at the entrance of the urban center. Another attraction are the forest one can find on the slopes and coasts of the Apoyo Lagoon Natural Reserve. Culture is also a highlight here. Massive, picturesque and cheerful processions are held during the festivities in honor of San Silvestre.

The city is small, quiet and cool climate. At its center is a cool wooded park with a sports field, playground, benches, walkways and kiosks. In imposing the former Parish of St. Catherine, with a nice and simple facade. There are some bars, restaurants and hotels nearby.

In various areas of the city, but especially to the east of Central Park, you can find colorful lodgest exhibiting ornamental plants and fruit trees on the sidewalks. There are an enormous number of species of plants and trees that are available here, really cheap prices. Nurseries make this a "garden city" for its colorful leaves and flowers.

At the entrance to the town of Catarina, beside the main road from the roundabout of Las Flores in Masaya, lies the resort villas White Villages Handicrafts, formed by a line of modules that offer crafts of various kinds plants and foods. The place is run by local artisans and small businessmen and the nearby San Juan de Oriente.

A few blocks from downtown, towards the east, is the Mirador de Catarina resort. In it there are several restaurants, and crafts vendors and traditional cakes, and even musical trios. You pay a small entrance fee and parking is available. It's impressive panoramic view of the crater lake of support, the skies cleared enough to look at the colonial city of Granada and the coasts of Lake Nicaragua. There are benches, walkways, a visitors center and you can even rent a small tour on horseback.

From the viewpoint there are ways to descend to Laguna de Apoyo, a steep country road where you can see cultuvos areas and the forested areas of the slopes of the reserve. However, the way down in public or private transport is a road which is accessed from the town of Masaya, and extending to the coastal community of Laguna catarineña Plan.

Support, calm turquoise waters, offers a very nice bathroom. On the coast there catarineño side summer homes and some hotels offer kayak and inflated tires, as well as small floating docks. It is also a biological station that welcomes visitors and offers diving tours.

At the top of the reserve is another nice viewpoint, the viewpoint of Diriomito, which is a rustic restaurants and beautiful views. From here there are amateurs who play the wing, and some offer air tours to visitors. You get to the lookout on a rural road that comes from Catarina and goes to the communities in the Masaya area, bordering the crater of the reservation.

This town celebrates dos Santos: Santa Catalina, whose parties are in late November, and San Silvestre, held in late December and early days of January. Both include mass processions, but it is during the second taking place colorful demonstrations.

In the festival of San Silvestre Torovenado occur, processions involving tens of disguise, accompanied by cheerful music chicheros. On each occasion, the crowd makes a similar journey through the main streets of the city, leaving the parish in the central park and arriving at the chapel located in the extreme south of Catarina. The creativity of the costumes and performances is awarded by a jury.

On December 30 Torovenado occurs at night, and during hundreds of people accompanied the procession of the saint, many of them dressed as ghosts with striking handmade masks. Some are numbers related theatrical legends, mythical characters or different situations addressed with much creativity.

The first of January, at noon, main Torovenado is performed, during which costumed participants representing picarezcos simple numbers of street theater, which reflect different social or political situations, or to any national or foreign characters.

There is a roundabout on the edge of town which is the joining point of several highways. The road coming from the 'Las Flores' roundabout (East of the city of Masaya), the other one coming from the split of Guanacaste, located on the Granada - Nandaime highway (South) and the last one, which comes from the highway to San Marcos (Carazo), passing by Masatepe and Niquinohomo. This makes Catarina a very accessible city.

When traveling from Managua, you have to get to Masaya first and then continue South until reaching the 'Las Flores' roundabout. Even though there are no direct buses, you can take a bus heading to Rivas, Nandaime or Diriá, and get off in Catarina.