The Nicaraguan flag has three horizontal bands with the national coat of arms centered in the white band. The white band represents the territory of Nicaragua as well as its pureness.

The coat of arms features a triangle encircled by the words REPUBLICA DE NICARAGUA on the top and AMERICA CENTRAL on the bottom.

Information derived from the Presidency of the Republic of Nicaragua
http://www.presidencia.gob.ni 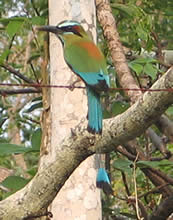 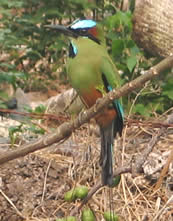 Nicaragua's national bird is the motmot. This brightly colored bird can be easily recognized by its long, light blue tail. Motmots eat mostly insects, and they, oddly, dig a hole to lay their eggs. They can be seen in forests throughout Nicaragua, mostly in the southwest of the country.

His habitat is not limited by city boundaries, as this bird can even be seen in Nicaragua's capital city, Managua. 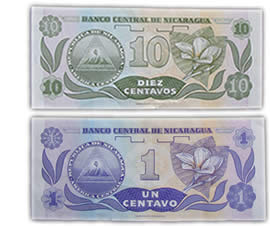 This colorfol flower called Sacuanjoche is Nicaragua's national flower. The flower actually grows on a tree, the Plumeria alba or Frangipani; a conical type of tree that flowers around May. The local name, Sacuanjoche, is derived from the Náhuatl language. The flower appears on the rarely used 1, 5, 10, and 25 cent banknotes

The Madroño (Calycophyllum candidissimum) is the national tree of Nicaragua.

The national anthem of Nicaragua was chosen after a contest held in 1918 by the incumbent government. The contestants were asked to write two quartets about work and peace, which had to be easily adaptable to the already established melody.

The melody was part of a liturgical song used by a frailer called Castinove as part of his teaching of Christian faith to indigenous people in Subtiaba, close to the city of León (nowadays, Subtiaba is part of the city)

The winner of the contest, who received all of the votes, was poet Salomón Ibarra Mayorga with his song known as "Salve a tí, Nicaragua" (Saveguard yourself, Nicaragua):