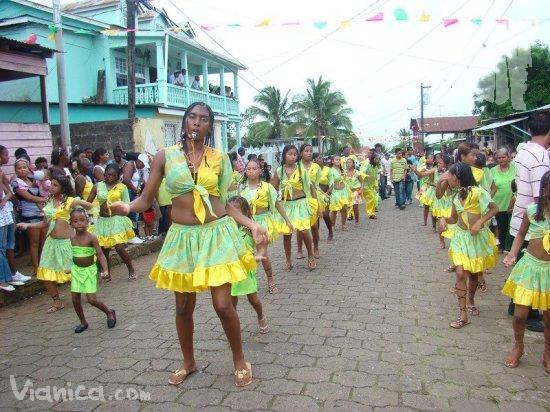 A cosmopolitan destination. Bluefields is the municipality where six ethnic groups merge, most of them as the result of a mix of African, mestizo and indigenous tribes. The majority of its population live in urban areas, from where visitors can travel to other sites, such as Monkey Point, Rama Cay, Corn Islands, The Bluff, among others.

Bluefields was founded in early 17th century by Dutch pirate Abraham Blauvelt, who began to use the site as their base of operations. Etymologically, Bluefields means "blue fields" and that word, which is the English translation of the name of the pirate, is composed of two parts: Blau (blue) and Velt (open field where they grow herbs).

The city's history is marked by several key moments. The first is its foundation, followed by the Miskito Keys shipwreck of a Portuguese ship was carrying African slaves. In that year, 1641, in the presence of the black race starts in the area.

The third moment represents the creation of the protectorate of the Mosquito Coast in 1861, which covered the Caribbean area of Honduras and Nicaragua, and created long after the English colonists allied with the native tribes that inhabited the Atlantic Coast. Following the British presence in Bluefields is still observed today, for example, the architectural style of the houses of the settlers who lived at that time, as well as religious groups.

The total population of Bluefields is approximately 49, 000 people, divided into urban and rural population. Of this amount, over 80% belong to first class and less than 20% in the second. The last living in the community of Rama Cay, Dokun, Tursuani, Kama River, Mahagony, Barcelona, Kukra River, Cano Black and The Bluff.

Also, Bluefields has a wide variety of religions, including Catholicism is, representing the majority. In descending order follow Evangelicals, Adventists, Moravians, Anglicans, Baptists and Jehovah's Witnesses. These religions are divided into about 20 churches located throughout the city.

With regard to ethnic groups living in Bluefields six groups. Constitute the majority of mestizos, who now are not only those who emigrated from the North, Central and Pacific Nicaragua, but those who are descended from ethnic mix Rama, Miskito, Creole, Garifuna Ulwas and the mestizos that moved to the Caribbean in the past.

A peculiarity of the city is that it speaks Creole, a dialect of English with American presence in the Caribbean. It is also very easy to find people who speak Spanish and English, which facilitates communication between residents and local and foreign tourists.

The center, music, architecture and commerce

Bluefields lacks an appropriate organization from the planning point of view. For a local or foreign tourists, it is likely that it resembles a bit to Managua, because the houses are arranged in a dispersed and without a common design. But do not get carried away with this, the lure of the city is still has colorful wooden houses of Victorian design, old buildings and the inevitable blaring reggae music that reminds the visitor that is in the Caribbean.

It is very important to note also that Bluefields has a comprehensive shopping area, which covers more than six city blocks. It locates the municipal market Teodoro Martínez, where pangas are taken to go to The Bluff and you can buy seafood at affordable prices. There are also a number of shops, restaurants, hotels, small food outlets, cyber cafes, bars, karaoke and disco. You can also find two service banks with automated teller machine (ATM), three health posts, a regional hospital, 16 private schools, five middle school centers and two universities.

Although the city is relatively small - as you can reach most of the important points and other neighborhoods on foot - in Bluefields there are several attractive sites. Almost at the entrance of the city is the General Moravian Church, built in 1849 but is actually a replica of the original, it was destroyed by Hurricane Jeanne in 1988. The building's white walls and high ceilings, dark red, stands out in the city.

On the other hand, the Catholic Church also has an interesting architectural design. In the facade you can see the image of the Virgin Mary, and their ceilings are high and airy. Within it are multiple images of the religion themselves, surrounded by colorful stained glass and a large garden.

Another point that you can visit the Kings Park. Bluefields is the only city in the entire South Atlantic Autonomous Region (RAAS), which has a central park of more than 60 years. This is right in front of City Hall and it usually develop exhibitions and other events of relevance. The site features a gazebo, playground and several tall trees in whose shade they relax locals and tourists.

For those interested in learning about Nicaragua's Atlantic Coast, it is advisable to visit the Center for Research and Documentation of the Atlantic Coast (BICU-CIDCA). It can refer to 1, 100 texts for History, Culture, Marine Biology, Ecology, Demography, among other issues, specifically related to the Atlantic Coast. The center, in conjunction with the Bluefields Indian & Caribbean University (BICU), published quarterly magazine Wani, where cultural issues are published, studies and interviews, as well as achievements, goals and concerns of the coastal population.

Furthermore, within the precincts of CIDCA is the Historical Museum of the Atlantic Coast. It kept photos of major figures in the region, artwork and books. The museum is open from 8:00 a.m. to 12:00 p.m. and 2:00 pm to 5:00 pm. The entry cost is not established, but it can provide a financial contribution to the maintenance of the site.

Holiday: May or May Pole Pole

Maypole (the English "May Pole") is the most famous and attractive holiday of Bluefields. This cultural event is derived from the British tradition of celebrating the arrival of spring on the first day of May, a month when the rainy season starts in Nicaragua.

It is said that this tradition arrived in about 1850 due to the direct or indirect influence of the English. Directly by the presence of settlers in the area and indirectly by the close relationship that the Kingdom of the Mosquito established in Jamaica, England's largest colonies in the Caribbean.

In the beginning, the blufileños cut a tree known as "Palo de Mayo" and decorate it with fruits and ribbons of red, yellow, blue and green. This was placed in a square, either in the Old Bank district or Cotton Tree, and a group of women danced around him. Subsequently allowed the participation of men, who were mostly musicians.

Over time, the original British tradition was added musical rhythms of African heritage, lyrical and forceful movements testimonial denoting very sensual.Following this, we created two versions of the Palo de Mayo, one that kept the classic style of the first lessons British and the other, reflecting the new pace.

Today, the Maypole dances and their music has spread throughout Nicaragua. The festival was first promoted as a tourist attraction during the 1980s and gained momentum with the passage of time. The dances are usually seen on the streets of Bluefields and the rest of the country belong to the second version.

El Palo de Mayo is celebrated in Bluefields during the month, with dances in each of the neighborhoods of the city. The most important days are the last of May, since it takes a culinary competition, a massive and colorful parade of parades, dance competitions and the crowning of the queen of the festivities. The festivities culminate on May 31 provided in the evening, when thousands of people take to the streets in a massive parade called "Tulululu", in which blufileños dance to drums and trumpets along the main streets Bluefields.

October 8: Day of festivities in honor of the Virgen del Rosario

October 11: Anniversary of the nomination of Bluefields as a city.

This city can be reached by land or air when traveling from Managua. The Augusto C. Sandino International Airport has daily flights in charge of the national airline La Costeña. The rates vary according to season, so it is recommended to call ahead for reservations.

Although the journey by road is longer, traveling by public transportation is also worth it. The buses (approximately C$150 per person) depart from El Mayoreo Market (Managua) on a daily basis. First, you have to get to El Rama (buses start leaving at 3:00 am) on a journey that will take you about five or seven hours.

Once in El Rama, you have to buy a ticket with the two companies that offer water transportation (approximately C$200 per person). The boat will navigate down the Rio Escondido and will get to the city of Bluefieds after 1 hour and 45 minutes.

Note:
The water transport companies are located next to the last stop of the bus. After paying for the boat, one has to pay the right to use the port (C$10 per person).