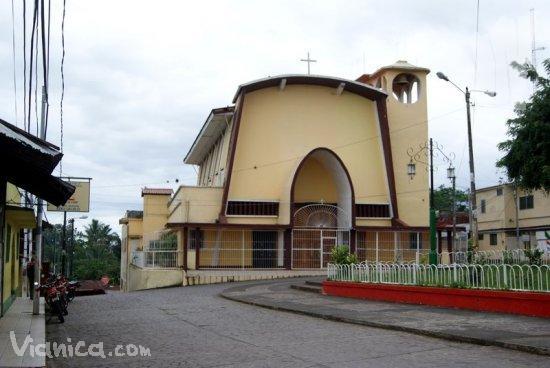 Jungle, lake, river, art and history. This municipality has various attractions. Its center is the city of San Carlos, in which the visitor will find multiple tourist companies and places to visit. The Solentiname Archipelago is located on the lake, and its islands are inhabited by nature and small communities of artisans and painters. The Los Guatuzos Natural Reserve, situated nearby, is home to a great diversity of plants, animals and insects.

San Carlos is the main town in the area, as well as the capitol city of Rio San Juan, which is located exactly located in birthplace of the Rio San Juan River in Lake Nicaragua. The city (whose origin dates back to possibly 1527) is small and rustic, but has the needed facilities welcome several visitors: hotels, guest houses, good restaurants, eateries, cafes. Here, one can enjoy fresh fish caught either in the lake or the river. Actually, the place is a paradise for fishermen; many of its inhabitants are engaged in this activity. In addition, sport fishing in the San Juan River and its tributaries attracts sports fishing enthusiasts from all over the world.

San Carlos represents the main entrance and exit for visitors of the area. It has a small airport with connecting flights coming from the international airport of Managua, a municipal port and multiple docks where boats arrive and depart heading to Granada and Ometepe. Also, one can find many fishing boats traveling to different destinations of the region, and a bus terminal with connections to Managua and other towns and cities.

This city, however, is not just a stopover. San Carlos offers several interesting events: it has a beautiful and tranquil waterfront on the shores of the lake that becomes very active during September and the independence festivities (14th and 15ht). An international fishing tournament is held at this waterfront. Further North, there is a small viewpoint from where one can observe the immense lake, the birthplace of the river and some islands of the Solentiname archipelago, as well as spectacular sunrises. Moreover, the center of the city features the 'José Coronel Urtecho' Cultural Center. Here, visitors will find information panels describing the history and wildlife of the region. The center also has three viewpoints offering incredible vistas of San Carlos and its surroundings. In addition, tourists can also visit the municipal market, where they will find a wide variety of tropical fruits.

The Solentiname Archipelago es located to the West, inside the lake, and is constituted by 36 islands of different sizes. This place is inhabited by abundant wildlife and a hard working community of fishermen and farmers who are famous - since 1960 - for their artistic and creative activities: primitive paintings and beautiful crafts. All their work has been promoted by the Nicaraguan poet and priest Ernesto Cardenal, who arrived in the place in order to preach his faith.

In decreasing order, the Mancarrón Island, La Venada and San Fernando are the largest and most populated of the archipelago. The other islands are quite small and most of them are currently uninhabited. Out of all, the most interesting ones are 'La Pajarera' island, which tourists can see hundreds of species of local and migratory birds, and the island of Mancarroncito, which has a large natural reserve.

Mancarrón Island features a hotel and several small shelters. Tourists can visit the small community of artisans, who can be seen at home carving or painting their creative pieces, which are also available for sale. There is a community living on atop of a hill village where one can find stones that where carved with Indian petroglyphs. Towards the East end of the island visitors can go to a large wetland. The 'peñón' can be found in the center of the island. This is the highest point of the land and offers an excellent view of the lake and the archipelago, but getting there requires a walk of nearly three hours. Also, the small, rustic and pretty church that was built by Ernesto Cardenal is located near this main dock of Mancarrón. There is a museum displaying pre-Columbian objects found in the archipelago at Mancarron as well.

The neighboring island of San Fernando also features a small museum and a Cultural House in which primitive painting are sold. Art pieces from painters of La Venada are also sold here as well, since the majority of artists are located in these two islands. Although the pieces are very similar, the style each of them use is quite different in each island. San Fernando has comfortable hotels and a rustic shelter.

The Solentiname archipelago is located a few kilometers from the city of San Carlos. To get there, you can take public boats at affordable prices, however, the trio will take you about two hours. A private boat means more money, but the trip takes just 45 minutes.

Los Guatuzos Wildlife Refuge owes its name to the indigenous community who inhabit the area for several generations. This reserve, located 45 kilometers from San Carlos, lies on the banks of the Papaturro River, which starts on the lake. The site features a natural center, a community shelter and many environmental activities offered by a communitarian company, supported by a national foundation. In the refuge, one can observe the magnificent wild biodiversity and visit a butterfly, a turtle and a alligator shelter. There are trails within the territory, either for walks or navigation, and another one made of a large suspension bridge.

When heading West, one will fin the Esperanza Verde Natural Reserve, which lies between the San Juan and the Río Frío rivers. It is located just 2 kilometers from San Carlos (15 minutes by the Frio River), and features trails, a lodge and restaurant. On this site visitors can see see hundreds of species of birds and an interesting wildlife, such as nutrias or 'water dogs'. Although the name and the administration is different, this territory is also part of Los Guatuzos.

Getting to both sites is possible through public and private transportation, which can be taken from the city of San Carlos.

There are three ways to get to San Carlos.

Air: a local company has daily flights from the Augusto C. Sandino International Airport, in Managua.

Water: You can travel on private boat. Another way temporary out of worw was a ferry (twice a week) in the city of Granada, which final destination was San Carlos and has stopovers in Ometepe Island; this way would be maybe reactivated soon, according to State sources.

Land: the highway to San Carlos begins at the joint of Lovago (Juigalpa - El Rama highway). You will find buses traveling from Managua to San Carlos at the Mayoreo Market.