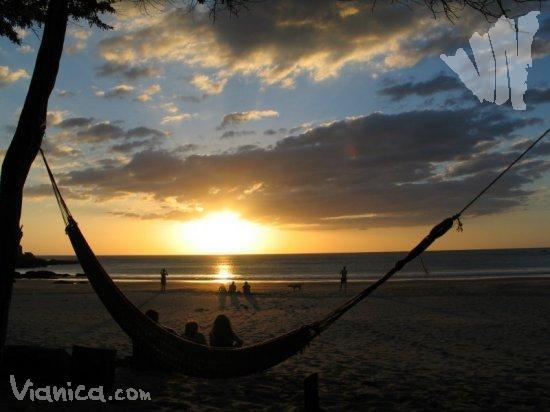 Surrounded by two mountains, the bay of San Juan del Sur is home to one of the most visited towns by surfers. Its urban center has a complete and diversified tourist offer, while in the rural area one can practice surf, fishing, whale watch, canopy, yoga, horseback rides and other sports. Its religious festivities are celebrated in honor of San Juan Bautista and the 'Virgen del Carmen', on June 24th and July 16th respectively.

Once a quiet, picturesque fishing village, discovered by the Spanish Andres Niño in 1523, is now one of the most visited destinations by foreigners and locals in the country. The city of San Juan del Sur has almost everything: hotels, restaurants, bars, clubs, language schools, a post office, a central park, a municipal market, a port, a police station and the famous bay of the same name.

This is the obligatory stopover of almost every traveler seeking for relaxation and lots of surfing on unspoilt beaches. The majority of these beaches are located throughout the municipality, including the most famous ones: Marsella, Maderas, Majagual, La Flor, El Ostional, El Coco, Las Salinas, El Astillero and El Yankee. Some of them have hotels, private houses or communities offering lodging options.

The infrastructure of the city of San Juan del Sur has changed in recent years. Today, the number of foreigners who visit and decide to buy a property to turn it into their homes (generally mansions), a hotel or a hostel has increased significantly. Also, tourism has brought economical development in the city. The municipal government has made improvements in public areas, such as the waterfront and the central park.

A point worth visiting when in San Juan is the 'Jesus de la Misericoridia' statue, located on the summit of the highest hill and built in 2008. From here, tourists have beautiful panoramic views of San Juan del Sur and its surroundings. In addition, there is a small chapel under the statue, where tourists can read about its building process.

Holy Week and the Pitahaya Festival

Holy Week is one of the busiest seasons. During this period, hundreds of locals and foreigners - especially young people - visit the city for its many beach parties organized at the bay or in the neighboring beaches. Also, December 31st is a good time to visit San Juan del Sur, since there are many 'end of the year' parties.

Another hectic season is the Pitahaya Festival, which is an initiative of a group of foreigners who live in the municipality. They organize activities to celebrate cultural diversity, music and sustainability. National and international artists, primarily from the youth scene, are invited to perform during the event. There are also surfing competitions, games, art workshops, and other entertainment activities.

When in Managua, take a bus at the Roberto Huembes Market. Once you get to the municipal market of Rivas, take another bus heading to San Juan del Sur. You can also get there by cab when you are traveling with a large group.