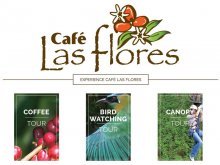 Staff was warm, friendly, and experienced.

Tour was as advertised. The staff did an excellent job. The included lunch was delicious and exceeded expectations. There are some gaps between the three tours, but we were taken care of and never felt forgotten. Just be patient and don't plan to jump from one activity to the next.

Smooth tour with a great guide.
There was some waiting between activities (around 15 mins) but apart from this it was a very enjoyable tour.

BEWARE: Great tour guides, staff not helpful and left without a ride back to the hotel!!

My boyfriend and I did a Canopy Zipline Tour on February 16th, 2013. We booked this trip 1 month in advance. We were very excited for the three hour tour of ziplining and learning about the indigenous plant life. We paid $69 USD for two tickets that included transportation from the entrance gate up the hill to main cabins for coffee and to be fitted for safety straps.

Once arrived, the staff did not know which group the 2 of us were a part of (we were never assigned to a specific group). A few people suggested we drink coffee while they figured it out - 25mins later we again asked where we should be and were pointed to a group already fitted and ready to leave. It had seemed the staff forgot about us entirely. Once fitted, the tour guides were great and friendly. An hour had passed since we arrived at 9am, and we just left to zipline. The tour guides took our cameras to take pics and videos of everyone - they did a wonderful job! The fun only lasted 1hr 30mins, though the excursion is advertised to last 3 hours. The website is not clear on how long the zipline lasts and not upfront about the level of difficulty (the zipline is a beginner level). When we returned, we paid at the main cabin, where we were told we owed $78 USD total. The cashier argued with me for 15mins saying that the fees have changed since we booked the trip. It was only after I went on the company's website on my phone and showed her the rates that she admitted she was charging me more. They also tried to deny that I paid a 10% deposit to book the trip online (which I had to show proof for, they did not have it in their records).
After paying, we were to have a truck take us to back to our hotel, but when we came out of the office, no one was there. After waiting 45mins in the sun, another tour guide asked a friend to take us to the bottom of the hill, where we were to PAY AGAIN for another taxi. This is unacceptable. We paid for rides to and from our hotel, and we waited for over an hour for another tour company to give us a ride because they knew we had been scammed.

Although the tour guides are wonderful, the trip was 1/2 the time stated online and did not come with rides from your hotel.

I would never book a trip through this unprofessional company again!!

Our guide (I can't remember his name!) was extremely informative and knowledgable. He even stopped as at the coffee house before going up to the crater in order to stall and be more likely to see the sights with less cloud coverage. He also gave us information about Nica's history unrelated to the volcano, which I'm pretty sure is bonus.

I was part of a study abroad group and we all had a great time! The staff ar mombotours was so much fun!

: We had a great time, professional staff who spoke english very well, very good equipment. The meetup spot is well marked on a main road. We did the zip line and lunch, some of our party did not do the zip line and instead waited at the hacienda until we returned. Thank you Maximo! Next time we will do a hike up the volcano.