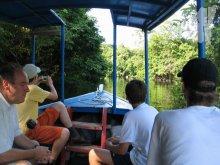 This tour bring together two of the classic adventures in Granada: visit to the historic colonial center in a horse-drawn carriage, and then visit the islets in Cocibolca Lake, where you will feed monkeys, and then take lunch in a island, after what enjoy a pool and hammocks for a while.

ONE (carriage and boat): We will start at 9 AM picking you up in your hotel in Granada city or the Central Park, from where we will begin the carriage tour in the colonial center. We will watch several streets, monuments and building, like the iconic Cathedral, San Francisco church and museum, Guadalupe Church en La Calzada. After one hour we will take the boat from the lake shore to start the lake tour. We will watch 75 islets and get to the monkeys island, where we will feed them with fruits. Then, we will get the Correviento Restaurant in an island. There, we will have lunch with a tropical juice (included). Next, we will spend a while on this island, enjoying the pool, the hammocks and the lake’s breeze. At 3 PM, the boat will take us back to mainland, where we will conclude the tour. The carriage or a taxi well drop you off in your hotel or central park.

Recommended:
Bring comfortable clothing for tropic, swimsuit and sunscreen. Bring extra cash of any extra dink or snack at the restaurant.

Your hotel in Granada city or the central park.

Cancellation Without Penalty:
Cancellations made at least 5 days before the day of the tour will not incur any penalties.

When the Mombacho Volcano erupted thousands of years ago, it threw huge rocks into Lake Nicaragua. As a result of this violent eruption 365 islets were formed in front of Granada. The islets differ...

What better place to explore the colonial city of Granada from than a horse-pulled carriage? Sit back and relax while the horses walk you through the city.

The city of Granada is one of the most visited in Nicaragua for being a well-conserved colonial city with a lot of nice monuments but...

The cathedral of Granada is one of the most prominent buildings of the city. It is located at the east side of the central park of Granada (Parque Colón). The building has been rebuilt several...