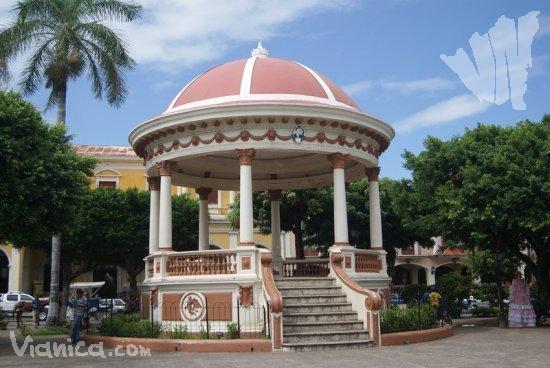 The city of Granada is one of the most visited in Nicaragua for being a well-conserved colonial city with a lot of nice monuments but also an amazing natural attractions.

In the center of the city, next to the Cathedral of Granada, there is the central park, a fresh place, perfect to chill drinking a natural juice or to eat a good vigorón, the typical food from the city.

The park has a huge kiosk in its center, a nice fountain and a statue. There is also an obelisk in memory of Rubén Darío, the famous Nicaraguan poet. At its four corners there are small kiosks specialized in the elaboration of the vigorón, this quite fresh dish composed of cooked yucca, cabbage salad, and chicharrón (pork rind). The food there will roughly cost you C$60 and then you can buy a fresh fruit juice for less than C$30. Those kiosks usually sell food from 10am to 8pm but close later when there are special events such as the Poetry Festival for example.

Around the park, there are different stands of Nicaraguan handicrafts and small food stands. You can also contract service of carriage to go round the city in a relaxing way.
During the day, the park is quite familial and fresh thanks to its fountains and its numerous tree. In the afternoon, a lot of retirees come to enjoy the air and the musicians playing. Even though there is a security guard taking care of the park all day, at night, after 9-10pm, it is not very recommended to pass by the park because people from Granada say it is the place where a lot of drug-addicts meet and where thieves and prostitutes are waiting for “customers”.

The central park is still a must-do of the city, all the more so it gives way to the calzada, a major touristic pedestrian avenue of Granada, with a lot of bars and restaurants.

Public transport
There are buses traveling from Managua on public transportation, the easiest way is to take a bus either at the UCA bus station or at the Roberto Huembes Market. Masaya's municipal market also has buses to Granada, as well as the city of Jinotepe (Carazo).

Provate transport
There are three ways to get to Granada. The first one, and commonly used by travelers, is the 'Carretera a Masaya', which is in good conditions. The other is by taking the Pan American Highway when you are coming from Nandaime. This will take you to the 'Las Flores' roundabout and then you will turn right and continue until reaching Granada. If you are coming from Boaco, you could go to the town of Teocolostote, pass by Malacatoya and continue to Granada.